Decolonise Architecture - Bath are a collective of University of Bath architecture students and alumni fighting for a new, holistic, transparent, and free format of education.

They aim to collaborate with Department of Architecture & Civil Engineering staff to create an educational experience that is inclusive for all. They believe that this will give students the ability to design for the betterment of the global community.

As an anti-imperialist student group, Decolonise Architecture - Bath's primary aim is to eliminate institutional discrimination through the Department’s educational curriculum, admissions and practices. They believe in a future where the industry is gender and racially diverse and does not facilitate or perpetuate systemic racism by being truly ethical. 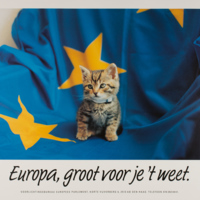 A selection of European Union related posters held by the University of Bath Archives and Research Collections, 1972, 1992-2014.

In 2017, with some help from a Faculty of Humanities & Social Sciences Teaching Development Fund grant, the Library and the Department of Politics, Languages & International Studies (PoLIS) jointly purchased a collection of over 140 EU-related posters. Featuring the languages of most European countries, the posters cover a wide range of topics from immigration and trade, to human rights and the environment. Some are formal; some are humorous. They are all colourful, communicative and visually engaging.

This selection of 44 posters was curated by Dr Nina Parish, Dr Maria Garcia and Dr Nick Startin, PoLIS, for a display in the Chancellors’ Building as part of the 48th Annual Conference of the University Association for Contemporary European Studies (UACES) hosted on campus, 2nd-5th September 2018.

We hope you enjoy them! 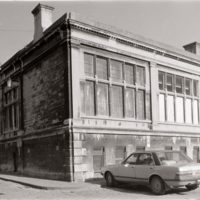 Architectural photographs relating to the city of Bath, 1965-1993.

These photographs are part of the Bristol Region Building Record (BRBR) held by University of Bath Archives and Research Collections.

This small selection of unusual photographs offers views of some of the buildings of Bath that are often overlooked or that no longer survive. It includes images of architecture ranging from the 18th to the 20th centuries; from newly finished to demolition in progress; from Georgian streetscapes to a 1970s shopping centre. All the buildings recorded here played a part in the City's architectural development and so earned their place in the story of Bath as we know it today. 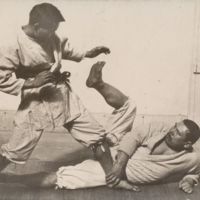 An online version of an exhibition hosted by the Museum of East Asian Art in Bath to coincide with the Olympic Games, Tokyo, Japan in 2021. 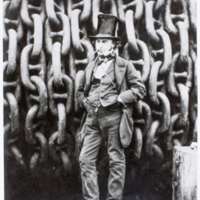 Photographic prints relating to the construction and launch of the SS Great Eastern, 1855-1857.

These photographs are part of the Hollingworth Collection held by University of Bath Archives and Research Collections.

Measuring 692 feet and over 18,000 tons, at the time of its launch, the SS Great Eastern was the largest ship ever built. The third steamship designed by Isambard Kingdom Brunel (1806-1859), it was intended to service a non-stop route between Britain and Australia with capacity for 4,000 passengers. The shipbuilder was John Scott Russell (1808-1882). Construction began in February 1854 and appears to have taken place at his shipyard in Millwall on the Isle of Dogs, East London, or at the adjoining Napier Yard, which he leased from 1854. Work was delayed by a fire in May 1855 and interrupted again between February and May 1856 owing to financial difficulties. On 3 November 1857 a first, unsuccessful attempt was made to launch the ship.  After further problems the launch was finally accomplished on 31 January 1858.

Brunel recognised the value of photography as a means of recording and illustrating work on the ship, and in late 1854 he commissioned Joseph Cundall and Robert Howlett to take a set of photographs showing construction progress for the information of the directors of the Eastern Steam Navigation Company. In May 1855 Brunel felt the need to issue very specific instructions governing all aspects - timing, frequency, camera position - of the photography, writing '...what I want is a clear representation of detail.' He additionally requested that a date should be made visible on each image for easy reference (though this did not always happen).

Together the photographs evidence the unprecedented scale of the project and some of the huge technical and logistical challenges associated with it. They also document details of Brunel's revolutionary engineering designs, including the double-layered hull and the compartmentalising bulkheads.

The photographs have been organised into chronological order as far as this has been possible.

At Special Collections, University of Bristol: 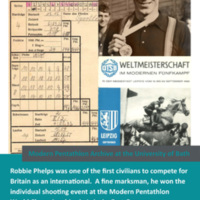 Get to know more about the sport of modern pentathlon and then try your luck with our quiz questions.

Created for the youngest members of the audience at the 2015 Modern Pentathlon European Championships, hosted by the University of Bath, our poster quiz has been designed to introduce you to the rich and varied heritage of the sport while gently engaging your brain cells.

Learn about the history of the modern pentathlon, a multi-discipline, Olympic sport, by exploring these posters based on the contents of the Modern Pentathlon Collection held at the University of Bath Library. Find out about the origins and development of each of the five events, the role played by the military, international competitions, tactics used to cheat, and the outstanding achievements of super-pentathlete Jim Fox. You'll also meet zombies and a very splendid purple tie. Then test your knowledge by answering our quiz questions.

Let us know how you get on! 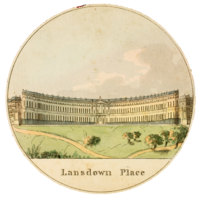 These prints and artworks are part of the Bristol Region Building Record (BRBR) held by University of Bath Archives and Research Collections.

This small selection of prints offers various views of Bath during the late 18th and early 19th centuries. It includes depictions of some of the city's most famous and iconic buildings and streetscapes at a time when Bath was the height of fashion. Individually each image records detailed visual information about well-known architectural features, some extant and some that no longer survive. Together they provide an artistic overview of how the city appeared and was perceived. 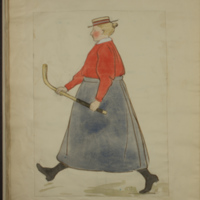 Photographs, documents, publications and ephemera relating to pioneering females in the sports of hockey and judo.

We've selected a small number of our favourite items to give you a taste of what these collections hold and how they complement each other. Together they document some of the unsung heroes of sport, evidencing the pioneering achievements of women athletes and highlighting the role they played in popularising female sporting activity.

Visit the image gallery by clicking on the link to the right.